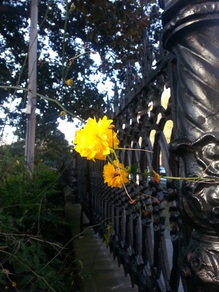 The year was 1861. The grand Bellamy Mansion was finished. All that remained was the planting of the garden. Although there was some maintenance through the 1930s, by the 1940s the garden was completely overgrown. It remained largely unkempt for the next three decades. Over the years many  plants died or were removed. By the time the restoration of the Mansion began in 1992, virtually all traces of the original formal gardens had disappeared. The Victorian elegance of the Bellamy garden has been faithfully recreated to interpret how the young landscaping plan may have appeared in the mid-1870s.

The plan for the landscaped garden included a symmetrical series of elliptical and circular parterre (ornamental garden area) beds. The most successful plantings were hardy native species that could withstand the extended hot summers of this area. The garden glowed with color throughout the year as camellias, pyracantha and holly brightened the winter months. 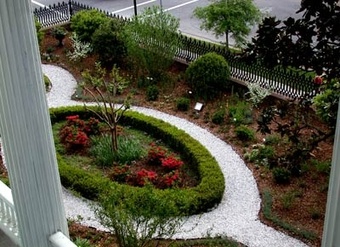 Spring brought the delights of daffodils, thrift, snowdrops, spiderwort, cheddar pinks, day lilies and crepe myrtles. Lady Banks roses spread their profusion of blooms as the candytuft delicately scalloped the edges of the pathways. Summer enjoyed oleander and crinum blooms. The fragrance of Cape Jasmine enhanced the soft curves of the white shell paths. Other small evergreen varieties kept the garden green throughout the year. And spreading their strong protective branches over all of this beauty were the magnificent  Magnolia trees. 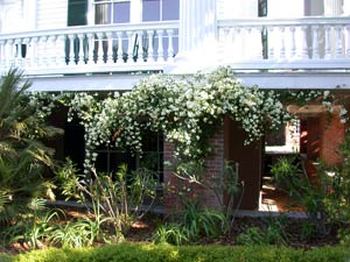 The garden was certainly eye-catching, a little non-traditional and definitely a source of pride to the Bellamy family. They may even be quite different from our modern conception of a Victorian garden. Family tradition says that it was Mrs. Bellamy’s interest in plants that inspired the design of this garden and prompted her to keep a botanical notebook on her plants. Unfortunately, the location of this notebook remains a mystery. After Mrs. Bellamy’s death in 1907, the garden began a slow decline. 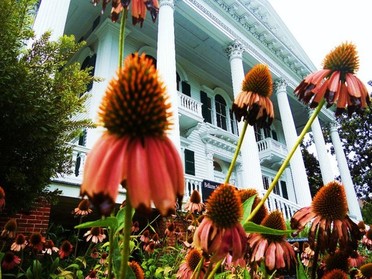 Most of what is known about the design of the garden is courtesy of a two-year process of historical research and archaeological investigation. The archaeology, coordinated by the University of North Carolina Wilmington, revealed the configuration of the beds and the materials (oyster, clam and scallop shells) of the paths. Historic photographs and personal recollections revealed the specific plant choices and locations.

Unlike the front and side yards, the rear of the house was a working area. The carriage house/stable, slave quarters and poultry shed served as the infrastructure that supported the endless work required to maintain a residence like the Bellamy Mansion. A full-scale archeological investigation of the back yard began in 1997 and ended in 1999. The fieldwork has provided us with the information necessary to physically re-create that environment. Analysis and report writing are currently in progress, and will offer data that allow us to more accurately interpret the day-to-day life in the backyard.

Recreation of the Bellamy garden took place in the fall of 1996. Major funding was provided by the Cape Fear Garden Club and Tabitha McEachern.