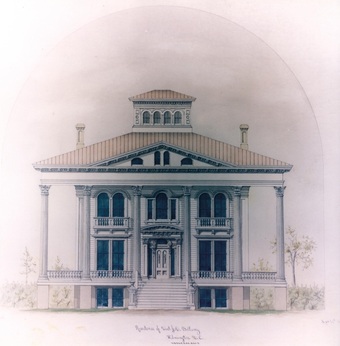 Drawing of the mansion by Rufus Bunnell.
Designed with Greek Revival and Italianate styling, this twenty-two room house was constructed with the labor of both enslaved skilled carpenters, and local, freed black artisans.

In 1859, Dr. Bellamy hired James F. Post, an architect in Wilmington to complete the project. Post hired Rufus Bunnell to be an assistant architect in May of that year. It is unclear where the idea for such an elaborate structure with a full colonnade came from, but certain signs point to the artistic eye of Belle, the first Bellamy child. While studying in South Carolina, she had taken a liking to a nearby home in Columbia that featured a similar design, and so she shared her ideas with Dr. Bellamy and eventually with Bunnell. Drawings for Dr. Bellamy’s new home would be produced though the late summer and early fall months, and in October 1859 the excavation of the construction site began and the foundation was laid. 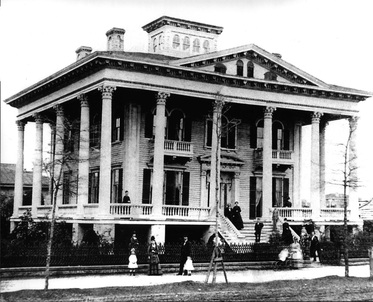 The Bellamy Mansion in 1873.
After the New Year, most of Bunnell’s drawings were complete and most of the building supplies had been ordered from New York, including the large Corinthian columns, along with various blinds and window draping. The property also included slave quarters, and a small carriage house. Among the men building the main house, the slave quarters, and carriage house were a number of slaves from Wilmington, several freed black artisans, and other skilled carpenters from the area. William B. Gould and other slaves and artisans executed their fine skills on the plaster moldings of the interior of the main house, and extensive woodwork throughout the entire twenty-two room home. The story of William B. Gould is fantastic and can be shared through his diary collection, Diary of a Contraband, sold in the Bellamy Mansion Gift Store.

The mansion in 1890.
Although Dr. Bellamy wanted his home constructed with classic style, and in an old reliable fashion, he was very much interested in modern utilities, and innovations that would allow his family to live in comfort. The house was equipped with many amenities not seen in mass production at the time. The innovations were a marvel and helped the home stand out from other construction in the Wilmington area during this time. 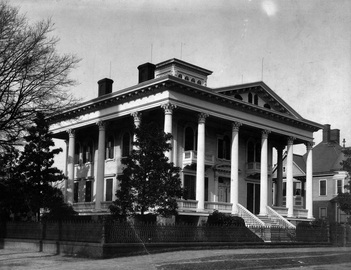 The mansion in 1900.
Hot air in each of the rooms would travel up the stairs to the belvedere and exit through the windows at the top of the Mansion. Warm air from the attic escaped the Mansion through Louver vents in the belvedere. Each of the small bedrooms on the top floor would have vents that would travel up and empty into the belvedere at the very top of the mansion. On hot days, a specially designed ventilation system helped keep the home comfortable. Besides the various modern features, the home was also outfitted with luxurious wood, iron and metal works, along with stylish rugs, furniture, and décor. Although Dr. Bellamy was described as a man with somewhat conservative taste, he needed his home to be both modern and comforting, especially with such a large number of people living in it.