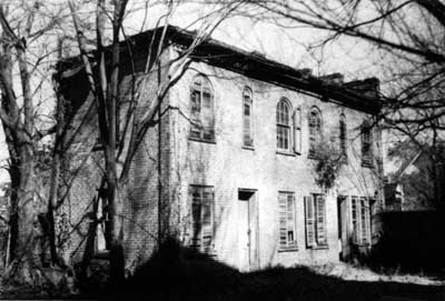 Slave Quarters in 1972.
On the northeast corner of the lot stands the original brick slave quarters, a rare survival of a once important urban building type, and one of the best preserved examples in the country. Such buildings were generally referred to as servants’ quarters or “negro houses.” A March 1860 deed cited the John D. Bellamy “kitchen or negro house” at the corner of the Bellamy property. The neatly but plainly finished brick building typifies urban slave quarters in the late antebellum South—one room deep and three rooms wide, with stepped parapets rising above the roof and a windowless back wall along the property line. 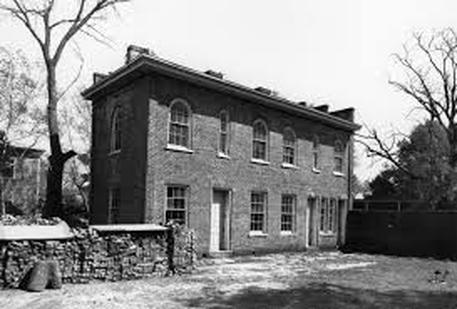 Slave Quarters in 1995.
Like the carriage house, the slave quarters were designed to complement the main house: the brick walls painted a light reddish color feature simple projecting pilasters, and the openings repeat the pattern of the main house, with square-headed windows below and arched ones above reinforcing the uniformity of the complex. The remarkably unchanged interior is the most intact of surviving urban slave quarters in the state and among the most intact in the South. Most of the rooms are relatively spacious and well lighted and ventilated, and they are finished with plastered walls and ceilings, locally produced yellow pine mantels of simple Greek Revival style, and doors and other millwork of factory-made northern white pine. 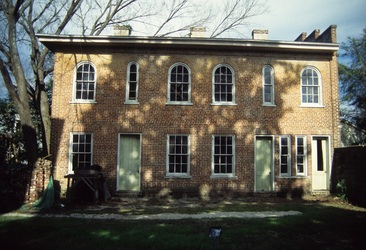 Slave Quarters in the 1990s.
Separated by a solid brick wall from the laundry room are two privies to the east. Having such facilities in the lower story of a slave quarter was not unusual in the urban South. It is not known which household members used which room, although in general genteel women preferred the privacy of chamber pots or water closets. On the second floor of the slave quarter there are three chambers.  All three rooms have a good view of the main house and the work yard. In 1861 these rooms were occupied by the Bellamy slaves. After the war they were used by free servants and later rented to tenants.