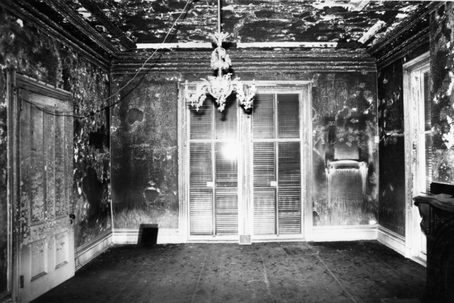 Northeast parlor post-fire
Soon the family found creative ways to utilize the mansion. The local chapter of the Colonial Dames held regular meetings in the parlors, and by the 1960's
an antiques' store operated from the mansion's basement. By the early 1970's, three great-grandchildren decided the best way to preserve the house was to create a charitable corporation. Bellamy Mansion, Inc. was officially incorporated in February
of 1972 by Emma Williamson Hendren, Lillian Bellamy Boney, and Hugh MacRae II.
Less than a month later, the unthinkable happened. Arsonists set fire to the mansion causing extensive damage to three levels of the home's interior.

Once only prepared to make ordinary repairs, Bellamy Mansion, Inc. faced a major restoration after the fire. The corporation spent the next fifteen years working to fund raise, stabilize, and secure the mansion. During this time another great-grandchild of John D. and Eliza Bellamy, Robert R. Bellamy II, donated money to purchase the lot adjacent the mansion to create parking.

Post-fire restoration efforts included stabilization of the slave quarters and near completion of the mansion's exterior restoration, but a full interior restoration required more money and time. In 1989, Bellamy Mansion, Inc. decided to donate the property to Preservation North Carolina (PNC) for myriad reasons. PNC could affect the interior restoration and operate the site as a public museum which had been a dream of Emma, Lillian, and Hugh. With the transfer completed in 1993, the Bellamy mansion site became a stewardship property of PNC with the three great-grandchildren serving as lifetime members on the museum's board of directors. ​
The restoration of the site's original slave quarters took more than a decade from initial capital campaign efforts to finally opening to the public in 2014, but the first phase began in the 1970's with stabilization of the roof by Bellamy Mansion, Inc. The second phase, which began in 2003, included more exterior repairs to all of the building's windows and doors. After more fundraising, the final phase commenced in 2013 with the interior restoration. The building is now one of the only original, fully restored urban slave quarters open to the public in the country.

Bellamy Mansion & Slave Quarters Before and After Photos

Other Preservation North Carolina Before & After Photos

Founded in 1939, Preservation NC (PNC) is the state's only private nonprofit preservation organization that serves all NC counties. Its mission is saving historic places important to the diverse people of North Carolina. Through its Endangered Properties Program, Preservation NC acquires endangered historic properties and then finds purchasers willing and able to rehabilitate them.  PNC has saved nearly 900 endangered historic properties, generating an estimated $500,000,000 in private investment. Interested in buying an historic property in North Carolina?  Check out PNC's website!